With the October launch of WWE 2K18 drawing near, 2K Games arranged a swanky hands-on event in New York city – an event attended by UNILAD.

After about an hour with the latest entry in the wrastlin’ franchise – and around another hour watching fellow journalists play (with much greater skill) – I came away largely impressed.

Don’t get me wrong: I came across a few issues that need ironing out before launch (which I’ll address shortly), but on the whole WWE 2K18 looks set to deliver something that can be enjoyed by just about everyone – here are five reasons I dug what I saw. There’s no arguing about this one – WWE 2K18 is the best looking wrestling game of all time. Facial expressions, character models, entrances, and move animations are an absolute treat to behold.

Clearly, a ton of effort has been put into creating an authentic experience. So much so, in fact, that even gamers with no interest in wrestling will find themselves stunned by John Cena’s scowl, or the rendering Samoa Joe’s nipples (though that second one might just be me being weird).

The 10 stars available in the hands-on include AJ Styles, Eric Young, Randy Orton, and Bobby Roode, as well as the two mentioned above, and WWE 2K18 cover star Seth Rollins, and I can confirm that not a single fighter looked or moved in a way that felt off.

It’s not just the wrestlers themselves who look great, though – the ring itself is wonderfully rendered, with the surrounding crowd and venues all beautifully lit and packed with little details.

Sure, you’ll be busy spending most of your time in-game twatting each other with chairs and whatnot, but sometimes it’s nice to stop and smell the roses, y’know? Not only do the barricades, tables, and steps all look better, they’re also much easier (and as a result, much more fun) to interact with.

Given that throwing your mate through a table, or performing an Irish whip are definitely not things that should be attempted in real life, it’s gratifying to see that the game now better represents the madness of a WWE match.

There’s still occasional issue with collision detection, and it doesn’t feel quite as polished as it could (yet), but there’s no denying that environmental weapons have a pleasing heft to them, and everything and everyone mostly reacts in the way you’d hope. A mechanic new to WWE 2K18 is the ability to lift your opponent and hold them up in one of four different positions (depending on the size and strength of your fighter, obviously).

Once you’ve got your foe tightly gripped in your virtually oiled-up arms, you can get really creative and rack up some serious damage. For example, you can grab your opponent in a fireman’s carry, escort them over the the nearest set of ring steps, hoist ’em up nice and high, and… well, I’m sure you get the picture.

I was implying that you drop them like a sack of spuds, if it wasn’t clear.

It’s a great new feature that lends a real dynamism to matches – and it’s super satisfying to pull off, too. One criticism often levelled at 2K17 was that it was too easy to predict when to press X or A and kick-out of a pin, meaning that finishers didn’t always provide the drama they should have because, well, they didn’t really finish anything.

The formula has been tweaked slightly in 2K18, however – kick-out window placement is harder to predict now, and the speed of the rotation changes depending on the strength of the move, and the amount of damage done.

The result makes for much tenser, more satisfying bouts that help create a well rounded and authentic wrestling experience. The Royal Rumble (a favourite mode of mine in the past) has been completely revamped and offers way more bang for your buck (or rumble for your rubels, if you prefer) than ever before.

There are ton of new animations and eliminations that keep things nice and varied, and there are some cool new mini game type events that work as a cross between button mashing fury and a QTE, which adds to the overall insanity of a Royal Rumble.

Oh, and the A.I has mercifully been given an overhaul, meaning you really have to watch your back – I know the dumbest plays being made in the ring were almost all by me.

Still, it’s great fun and all comes together brilliantly – I can see this being where I spend most of my time, come launch day. 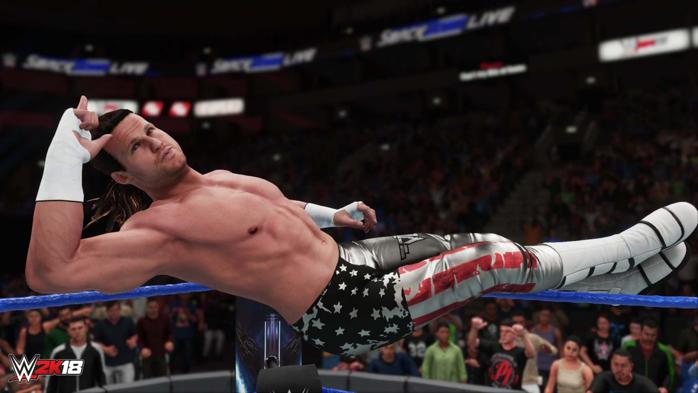 Into every life, a little rain must fall, and I did unfortunately encounter a few frustrating elements during my time with the game.

The most egregious of these was the noticeable dip in quality during 6 man matches, both in terms of general visual fidelity (everything gets just a bit… grainy), and the framerate, which slows to what can only be described as a drunken crawl.

However, it’s worth noting that executive producer Mark Little has assured numerous publications that this issue will be solved before the game launches.

There’s also the occasional clipping issue, and times where a fighter doesn’t quite react to a punch or kick in the right way – but these instances were few and far between for me, and I spent far more time enjoying the game than being beset by a variety of issues.

Provided 2K can iron out the creases in time for launch, I truly believe that WWE 2k18 could be the freshest instalment in years – one for both wrestling fans and casual gamers alike.