Meat eaters are enraged by the new introduction of a vegan black pudding to Asda stores.

Black pudding, often eaten with a full English breakfast, is typically made from a blood sausage that contains pork, suet and dried pig’s blood.

The Bury Black Pudding Company announced on Twitter that their vegan black pudding will be available to buy in Asda over the next few weeks.

The post was captioned, ‘A lot of you have been waiting for this…’

The new plant-based product, made from black beans, has swapped out the pig fat for vegetable fat instead.

Asda made an announcement that the supermarket would soon roll out the vegan black pudding to hundreds of its stores nationwide.

While the introduction of the vegan-friendly product may please many vegetarians and vegans who can finally include black pudding in their breakfasts again, the new addition has already received some angry responses.

In the comments section of the tweet, one user wrote, ‘Sorry, but this is in no way, shape or form Black Pudding.’

Another added, ‘Is it April Fools Day?’

Vegetarian black puds. Well I’ve heard it all now. They won’t eat meat but will eat stuff that tastes like meat, looks like meat, and has meat texture. I don’t get it. I’ll stick to proper black puds’, meanwhile, a fourth wrote, ‘Why the f*** are we pandering to vegans all the time? 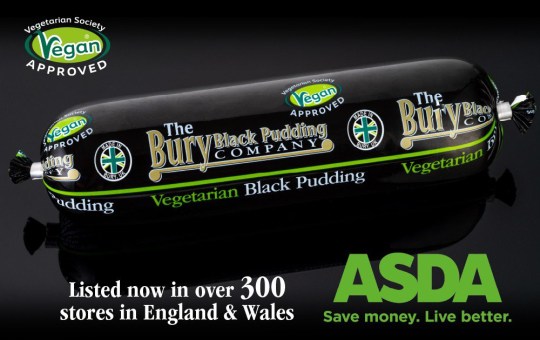 Matthew McDermid, responsible for the brand and marketing at Bury Black Pudding Company said, ‘We have seen the demand for our vegetarian and vegan black pudding increase significantly over the last 12-18 months.’

While the Bury Black Pudding Company and Asda are yet to announce a specific date when the meat alternative will be available in-store, they have announced it will be very soon.