Expert Reveals Weird Truth Behind This Picture of Kim Jong-un

The tyrant Kim Jong-un is well known for his carefully managed public image but a recent photo released by one of North Korea’s state news agency shows a different side to Mr Kim.

In the odd photo, the usually authoritarian and stern Kim Jong-Un is pictured allowing a man to jump onto his back for a piggy-back ride.

Mr Kim, who reportedly approves all photos before release, usually has a face resembling a man who’s attempting to stifle a particularly warm fart, so it’s odd that he’d be pictured smiling. 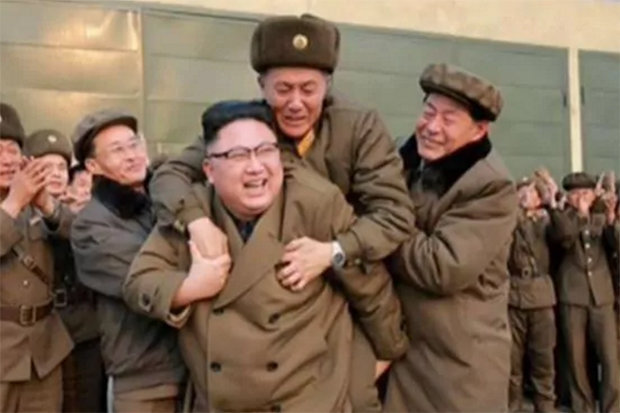 According to Michael Madden, an expert in the reclusive Hermit Kingdom of North Korea,  Kim could be trying to re-brand his image into something a bit friendlier.

Nobody would dare piggyback his father or even his grandfather. But on an interpersonal basis, than his father.

It conveys a certain sense of political confidence in his rule and leadership of the country. If he didn’t feel secure, then he wouldn’t allow these images to be disseminated – he would need to appear distant and cold.

Were we going to try and revamp Kim for a millennial audience, we’d recommend working on his social media presence, freeing the prisoners from the alleged work camps and growing a bushy beard… it works for hipsters, it may work for Kim.

It’s odd that Kim seems so happy with himself considering the photo was taken just three days after North Korea fucked up another missile launch.

According to the U.S. Pacific Command the missile looked like it exploded just seconds after launch.

Aren’t missiles supposed to explode upon impact, not launch?

Kamikaze Pigeons Are Being Trained To Prevent Terrorist Attacks