Three teenagers have created an app to help dementia patients suffering from speech, memory and recognition problems to recall their loved ones.

The Nigerian-Irish girls’ breakthrough app won the Technovation Girls challenge, an international competition that asks young women and families to come up with tech-driven solutions to real-world challenges. 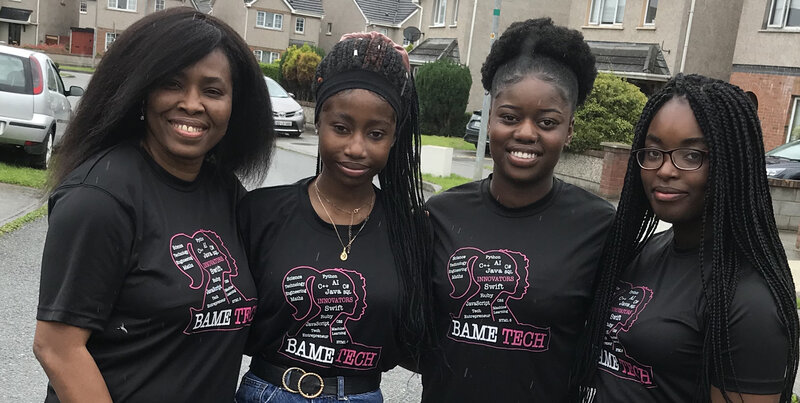 Memory Haven also includes games designed to improve the brain’s ability to remember, with results from the games stored in the app enabling doctors to analyse their patients’ cognitive function.

Rachael Akano, one of the app’s creators, told NPR the games were designed ‘to put their cognitive ability to the test while promoting memory retention in a fun way and improving focus and speed.’

Rachel also says the app uses facial recognition to create musical playlists for users, saying: ‘[The app] detects the mood of the user and plays playlists based on their mood. So if they’re sad, it will play something to brighten up their spirits.’

The app also includes a mood tracker, where users can log how they’re feeling, as well as health trackers to measure heart rate, blood pressure, and other vital statistics. Akano, who lives in Drogheda, north of Dublin, worked with her sister, Margaret, and their friend Joy Njekwe to develop the app. The girls were also mentored by Evelyn Nomayo, an Afro-Irish data scientist at Trinity College.

Evelyn, whose mother suffered from dementia, said she wanted to mentor the girls as she had grown frustrated with the lack of support for girls, and Black girls in particular, working in science, technology, engineering, and mathematics (STEM) areas.

‘[During my PhD], most of the time, I was either the only girl in class or the only black person or person of color,’ Evelyn said.

‘Whether I’m working or being educated, it’s so obvious that there’s a shortage of women in this space. So I just felt it: There was a need to bring more girls and people of color into that space.’

However, the girls have also struggled during the competition, and were targeted by racist comments when they reached the final.

Rachel said: ‘People said we weren’t Irish and that we didn’t deserve to represent the country. They put a monkey face. Just crazy, crazy oceans of racism for absolutely no reason.’

But they didn’t let other people’s bigotry stop them; they beat out 1,500 other entries from 62 different countries to win, and Memory Haven is set to launch in app stores later this month.